We have two types of receptors in our retina: rods and cones. The rods are responsible for achromatic vision whereas the cones are responsible for color vision. In addition to this basic difference, the rods have a much lower activation threshold than do the cones. In fact, rods are approximately 1,000 times more sensitive to light than are the cones.

Our eyes contain about six million cones and 120 million rods. The cones are concentrated at the area of greatest acuity (directly behind the lens) whereas the rods tend to occupy the periphery. At the extremes of the retina, only rods are present. This is why we can better perceive faint objects by averting our glance rather than viewing the object directly. While in dim light, only the rods are activated. This explains why we cannot perceive color in most celestial objects.

Rods also differ from cones in their sensitivity to different wavelengths of light. Rods are most sensitive to wavelengths of 510 nanometers whereas cones are most sensitive to wavelengths of 555 nanometers. This difference is known as the Purkinje Shift, named after Johannes Purkinje. In 1825, he observed that while two flowers appeared equally bright in the daylight, a blue flower appeared brighter than a red one under twilight conditions. The differential sensitivity between the rods and cones also explains why our night vision is not disturbed by red light. Rods are essentially insensitive to red.

Regarding night vision, it is a common misconception that our gradual adaptation to the dark is accomplished by the dilation of our pupils. We know that our pupils constrict in bright light and dilate in dim light but these adjustments are quite small and rapid in comparison to the adaptation that takes place at the neurochemical level. Once again, we see a difference between the cones and rods in this respect. Cones achieve maximum sensitivity after seven to ten minutes of nonstimulation. Rods, on the other hand, continue to increase their sensitivity for up to an hour while in darkness.

It may appear that most aspects of our perception are "hard wired." While this may be true to some extent, many of our senses are strongly influenced by higher-order processes (e.g., learning, inference). A prime example is the area of depth perception.

Our binocular vision creates a slight disparity between the images that fall on each of our eyes. The impulses from each eye flow along the optic nerves and converge at the optic chiasma. They are then combined in the occipital cortex of the brain. This allows us to see in three dimensions. Humans and other animals that rely heavily on their vision will instinctively avoid drop-offs as soon as they are able to move about.

Whereas the basic experience of depth is innate, many other cues must be learned. We can "see" depth with monocular vision because of these cues. For example, the parallax effect provides us with information about an object’s distance from us. Closer objects appear to shift more than do distant objects when the point of observation moves along a perpendicular plane. You can demonstrate this effect by holding your thumb at arm’s length and alternately look at it through one eye at a time. You will notice that your thumb will move relative to its background. Of course, it takes much larger distances between observing points before you will notice any shifts in celestial objects!

Several other cues to depth are available without the luxury of binocular vision. One of these cues is size. Given two comparable objects, the larger one will be seen as being closer than the other. Shadows cast by objects (as well as attached to them) also provide us with additional information about depth. This is what allowed Galileo to determine that there were mountains and craters on the moon.

Another cue to depth is the height of an object in our visual field. Objects near the bottom and, to a lesser degree, top of our visual field appear to be nearby; objects toward the horizon appear to be more distant. Related to this is the principle of size constancy. This refers to the fact that we tend to perceive a particular object as maintaining its inherent size despite changes in its distance from us. For example, we see an 8.5 X 11 piece of paper as maintaining its size regardless of the changes in the retinal image itself. We do not perceive this sheet of paper as actually growing or shrinking in size as we approach or receed from it. This means that we make simultaneous judgments regarding an object's size and distance. We experience objects that lie at great distances from us as being very large. This explains why the moon tends to appear so much larger when it is near the horizon. Although the moon produces the same size retinal image when it lies near the horizon as it does when it is high in the sky, seeing it on the horizon (i.e. very distant) forces us to perceive it as much larger than when high in the sky. The fact that it is obscured by very large objects near the horizon adds to this effect. Whenever one object appears to overlap another, the one being obscured is perceived as farther away.

The figures below help to illustrate this point. The actual size of the moon is identical in each (in fact, one is a copy of the other). The percieved size is dependent upon the context in which it is viewed.

Actually, this example does not do the effect full justice because the moon that is depicted as high in the sky is bounded by a frame. This encourages us to perceive it as larger than we would if there were no distinct borders.

A more graphic demonstration of this principle is presented below. In this scene, we tend to perceive each of the figures as being the same size. 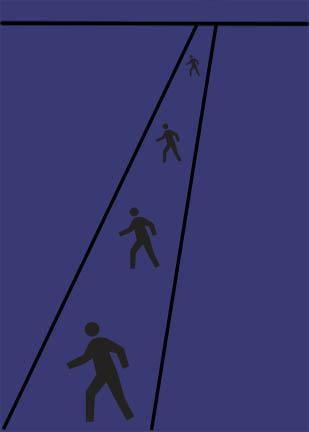 The images below are variations on the same theme. On the left, the most "distant" figure was copied and pasted next to the "closest" figure. This highlights the drastic differences between their actual sizes. In fact, it is difficult for most of us to perceive the two smallest figures as being the same size due to their placement on the scene.
A similar example is made in the image on the right. In this instance, the foreground figure was copied and pasted into the background. It now appears to be a giant looming on the horizon.

Finally, one very significant characteristic of human perception is our tendency to organize the information we receive. We tend to perceive objects as an integrated whole, a gestalt, rather than elemental bits of data. This is evident in how we view each of the "objects" presented below. We see the figure on the left as a triangle and the one on the right as a square despite the fact that each is composed of an arrangement of small circles.

In light of this fact, it is easy to understand how people in ancient cultures saw figures (i.e. constellations) rather than random stars in the sky.

Our expectations and intentions exert a very strong influence on our perception when we are presented with vague or incomplete data. We tend to rely much more on our beliefs of what the object should look like.